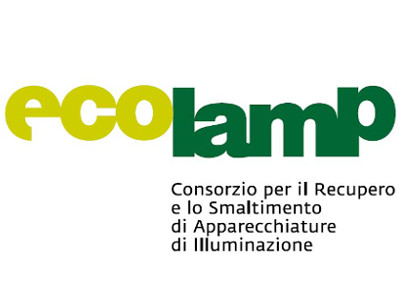 In the carrying out of the Venice Carnival 2010, 2011, 2012 and 2013 the Consorzio Ecolamp, one of the mains sponsor of the event, developed a huge communication campaign addressed to the people living in Venice ad to the visitors of the event, cooperating with the artistic and executive production of the event. Venezia Marketing & Eventi offered to the company several chances of visibility and of direct contact with the visitors, something unique in the field of sponsorships.

Ecolamp deals with the disposal of exhausted and polluting light bulbs, like the low energy consumption bulbs, that today in Italy must be delivered in appropriate special collection points organized by the local administrations (Ecocentro). Therefore, it is fundamental for Ecolamp to make environmental education campaigns, to make people aware of the recycling activity made at the Ecocentro, and several promotional activities had already been made by Ecolamp on the whole national territory.

Venice and its most famous public event, the Carnival, have been selected by Ecolamp to concentrate here the main communication efforts, exploiting the hundred thousands of people that flowed to Venice in the 11 days of planning of the carnival.

The presence of Ecolamp has been carried out in these contexts:
- In 2010 edition a didactic show called "Lamp&rilamp", aimed to improve the recycle awareness, has been set up in Campo S. Angelo for the whole duration of the events, being included in the official program of the Carnival 2010 together with the other shows and attractions, while 6 temporary shops, reduced versions of the show "Lamp&rilamp", have been set up in in other crowded locations of the historical center of Venice and in Mestre.
- In 2011, 2012 and 2013 editions the educationals have benn concentrated in Campo San Polo, location of the carnival traditionally dedicated to children and families, where a scenographic structure dedicated to Ecolamp hosted its communitation activity together with entertainment and shows for children specifically conceived by the Artistic Direction of the carnival and connected to environmental protection and recycling, with characters and performances expressly thought for this purpose, specific gadgets, installation of interactive games based on the "augmented reality", etc. The whole Campo San Polo, location of an ice skating track, was dedicated to the communication by Ecolamp.
- A maxi-billbord 13x11 mt in Piazzale Roma has been dedicated to the corporate communication campaign (personalized with carnival themes) for the whole month of February 2010.
- A gala dinner has been reserved for guests of Ecolamp at Ca' Vendramin Calergi, with a carnival show in the after-dinner, and other moments of reserved access to Piazza San Marco to attend the programmed shows.
- Press conferences have been dedicated to Ecolamp, in cooperation with the Municipality of Venice, to communicate to national and international medias its business.
- The company mascots "Voltonio" and "Bidonia" could circulate in the city during the carnival, doing hand to hand leafleting, distributing gadgets and walking on the stage of Piazza San Marco as special guests of the Best Masked Costume Contest of the carnival 2010. Furthermore, in the 2010 edition a special photography contest has been dedicated to the ability of the public to take photos of the mascots, and the winner has been awarded with a weekend in Venice. The contest has also been promoted through the official website of the event www.carnevale.venezia.it.
-  Finally, the Ecolamp logo has been included in all the official communication of the carnival.

For all these activities VM&E supplied to Ecolamp an "all inclusive" set of services, that included the availability of all the main necessary services: the rental and the assemblage of the temporary structures (gazebo), the branding of the structures (covering sheets), the employed personnel, the utilities, the production and the set up of the maxi-billboard, the organization of the press conference, etc.