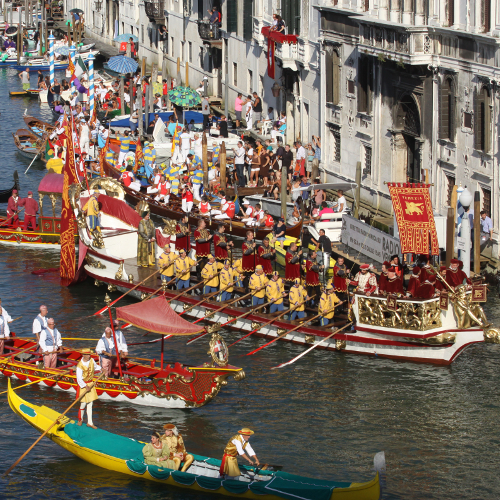 The Regata Storica (Historic Regatta) is the main event in the annual calendar of races Venetian rowing, sport virtually unique in the world, practiced for hundreds of years in the Lagoon of Venice, with its characteristic way of rowing "all'impiedi".

The Regata is made even more spectacular by the magnificent historical procession that precedes the race, in memory of the events took in honor of Caterina Cornaro, Queen of Cyprus.
It 'a parade that starts from the Bacino di San Marco and continues along the Canal Grande, flanked by a dozen wealthy boats parade with hundreds of traditional boats rowed in colorful uniforms.
The parade is followed by four competitions, among which the women's regatta on "mascarete" and one of the Champions in gondolas.
In the intervals of the races there are many side events.

100,000 the people who follow the Regatta along the banks of the Grand Canal and St. Mark's Basin, while on average, are about one million TV contacts (7% share) to live on Rai 2.
And more than 100,000 listeners to the live broadcast on Radio Venice.
The target audience is made up of tourists, mainly interested in the colorful procession of historical craft of Venetian Venetian rowing enthusiasts that find place in the early morning with their boats to better follow the event and also most numerous is also the boundary of celebrities and artists for the simultaneous unfolding of the Venice Biennale and the Venice Film Festival.