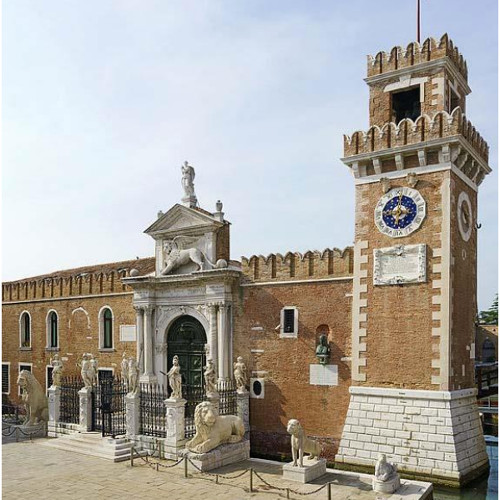 The Naval Museum, founded in 1919, is housed in a fifteenth century building originally used as a granary, which overlooks Campo San Biagio, in the immediate vicinity of the Venice Arsenal and is 5 minutes’ walk from St. Mark’s square.

The Arsenale of Venice was the forerunner of the Naval Museum. In the Arsenale scale models of ships constructed or to be constructed were stored. The "House of Models", so named at the time, was sacked in 1797 by French troops who also destroyed other places dedicated to the history of the Serenissima Republic, such as the armoury of the Palazzo Ducale.

The laborious recovery and reorganization of the remaining objects, forming the core of the Naval Museum, began in 1919 on the initiative of the Navy General Staff.

In 1964 the museum was transferred to its present location in Campo San Biagio.

Arranged on five levels and comprising 4,000 square metres and 42 rooms, it houses many interesting objects and models from the Venetian and Italian navies, such as the original lanterns from the ancient war galleys of the Serenissima Republic, the famous "Maiale” (“pig”), a manned torpedo used in the Second World War in the famous "Raid on Alexandria" and a collection of traditional boats of the Venice Lagoon.

Beyond the main building of Naval Museum  is the Ships Pavilion, located in the ancient "oars workshop" of the Arsenal.
Ships Pavilion is an extension of the Museum’s main building and houses vessels of great historical importance.